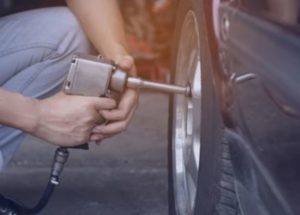 Not surprisingly, but stripped lug nut can be one of the most irritating problems you will come across while doing vehicle repairs.

Most of the time, you would probably have noticed that lug nuts become stuck when someone goes a bit too far while tightening.

Well, a typical lug nut has a cap. When torqued beyond the mentioned specification, the cap separates from the lug nut and allows moisture to get in. This can then cause the nut to rust and stick to the hub assembly.

If you find yourself stuck with a stripped lug nut that won’t come off easily, you’ll surely need to have an extra set of tools nearby.

How to get a stripped lug nut off a tire?

This article will help you learn some of the easiest and effective steps through which you would be able to easily remove a stripped lug nut that’s stuck to the wheel.

If you are working in a garage, then it’s not much of an issue. Just make sure that you have enough space to move around freely.

If you need to change a flat tire on the side of the road and you found out after trying that you have a seized lug nut, It is highly recommended that you tow the car or push it to a gas station or an empty parking lot before attempting to get rid of the damn thing.

Put the car in Park or P(if you have an automatic) and just apply the parking brakes, especially if your car is parked on an inclined road. You will need to put a considerable amount of force while trying to remove that seized lug nut, so it is also important to make sure the car is anchored properly.

What’s the most obvious reason why lug nuts get stripped or stuck in the first place? Rust. The next prominent reason would have to be overtightening the lug nuts.  You will probably be surprised how the experts at certain tire shops don’t even know the proper torque numbers while tightening the nut.

For this specific reason, it is considered best to saturate the offending lug nut with enough amount of penetrating oil. The WD-40 works quite fine, but for convenience, you can also use any type of spray-type lubricating oil.

If you observe a lot of rust on the surrounding areas of the nut, just can use a hammer to strike the lug nut a couple of times in order to help break off some of the rust. Relax and go ahead and spray WD-40 on the lug nut after striking it a couple of times with the hammer. One more important thing, Let the oil soak for 5 to 10 minutes. This is usually considered enough time for the oil to actually penetrate the inside of the nut.

Now, choose a 12-point socket head for extra grip. You will require all the biting force that you can muster in order to free the seized nut. Furthermore, make sure that you choose a socket that is slightly bigger in diameter than the stripped lug nut. Well, the actual size of the socket depends on the size of the lug that you are dealing with.

Got your socket ready? Now, grab the hammer and start to ram that socket into the seized lug nut. You might probably need to hammer a couple of times before it’s you are sure that it’s tight.

Also, remember that the socket will need to be extremely tight. If you hammered the socket and it starts to wiggles in place, there are chances that you are using the wrong socket head.

Now as the socket is nice and tight,  now it’s time to attach the breaker bar to the socket. You now have the leverage to loosen that problematic lug nut. It would be better to grab the iron pipe and then slide it over the handle of the breaker bar. Now, You have a few more inches of leverage to successfully loosen up that rusted nut.

Don’t forget to exert force in a counterclockwise direction, try to apply all the force you can muster to loosen the nut. Don’t do it fast! You might risk grinding the socket to the bad nut. Keep Applying force gradually until the seized nut loosens up and turns smoothly.

It is important to note that the iron bar has the effect of multiplying the applied force on the breaker bar. You can even use the breaker bar itself, especially if one is using a long handle. Whereas using an iron pipe is a trusted technique as well that works perfectly every single time.

Now remove the nut and inspect the stud. If you observe any damage to the stud, it would be wise to have it replaced immediately at your local shop. Just throw out the stripped lug nut and replace it with a new one. Problem solved!

Considering the worst-case scenario, you might need to tack weld a similar nut over the damaged lug nut so that you can easily grip it with the socket head. But the problem is that this runs the risk of damaging your wheels, and especially if the lug nut is too short.