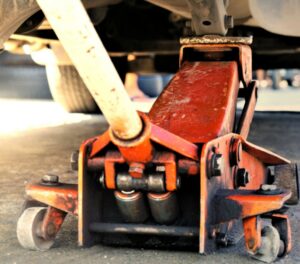 Moving your floor jack from its place and seeing small drips under the machine is straight out of every person’s nightmare. It is not only annoying to clean the ground all the time, but also makes a person constantly wonder what is wrong with their floor jack which is causing the leaking.

The problem of fluid leaking from a floor jack is not something that should not be taken lightly. It is a direct signal that there is some sort of problem with the floor jack that should be taken care of immediately. Otherwise, the machine may stop working during lifting a vehicle.

To keep yourself out of such dangerous circumstances and your floor jack functioning flawlessly, it is essential for you to get to the bottom of the leakage. Lucky for you, the major reasons behind a floor jack leaking have been shared in this article. So without any more delay, let’s discuss why your precious floor jack might be leaving an oily residue behind.

Why Is My Floor Jack Leaking?

You will find the answer to why your floor jack is leaking in detail in the factors listed below.

A floor jack leaking all over the floor means the owner needs to take a closer look at the machine and do a round of maintenance. There are many reasons why the machine leaks, but two of them are the most common in different models of floor jacks. This disaster either happens because of a low fluid level in the floor jack or when one of the seals gets damaged. Both of them are discussed in detail below.

The first and most common reason behind your floor jack leaking all over the garage is the low fluid level. Every model of floor jack runs on its special fluid called hydraulic jack oil. The machine needs a proper level of this fluid in the oil filler port. A floor jack only works flawlessly when the owner adds the right oil and the level is high. When the fluid level drops, the performance of the floor jack takes a hit with it. It stops working smoothly, and along with the performance, another disaster also happens. The machine starts leaking oil all over the floor. It starts from small drips which then turn into constant leaking.

The second reason which usually causes a model of a floor jack to leak all over the ground is damaged seals. There are small seals present inside every model of a floor jack. They are present in the piston region of the floor jack, in the release valve, and the oil filler port. Their job is as the name indicates, they seal the openings and ensure that there is no leakage or dripping, especially the one which is present in the oil filler port. Therefore, when the machine starts dribbling fluid all over the ground, it is a clear-cut indication that the seals are damaged or worn out. As the port is opened frequently to add more fluid to the floor jack, it often causes the seals that are present in there to get damaged more quickly than the ones present in the rest of the floor jack.

Even though the leaking of oil is quite a nasty problem, there is a way to fix it. You do not need to throw the old floor jack out or call for maintenance. First, inspect the oil filler port to make sure that the fluid level is normal. If it is low, then you need to add more fluid to the port to eliminate leaking. However, if the leakage is not due to a low level and the damaged seals are causing it, then the only fix is to replace the old worn-out seals. Adding new and strong seals in place of the old ones will help you get rid of the leakage issue, as they will prevent the fluid from spilling over.

It is highly frustrating when your floor is covered in fluid leakage every time you use the floor jack. Instead of throwing the old model out and spending tons of money on a new one, read the article above to find out what is causing the leakage. Once you know the source of the problem, then it will be easier for you to fix the issue.