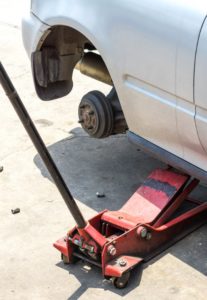 There is no doubt that even the simplest model of a floor jack can be a very tricky-to-operate machine for a first-time user. Even a task as small as locating and identifying its minor parts, for example, the release valve will take hours if the user possesses no prior knowledge. I come bearing good news for such novices.

Due to personal experience and failed encounters, I am familiar with this frustration. But there is no other way around it, as this is a critical part of floor jacks. Therefore, to make the tedious job of finding the release valve easier, I am sharing exactly where you can find this part on your model.

So if there is any novice out there who has no clue about what to do, the article below is like a blessing in disguise. Without any more delay, let’s find out the exact location of this small yet nifty part of your floor jack.

Where Is The Release Valve On A Floor Jack

It may seem difficult to find the release valve due to its small size, but do not fret, with the aid of the following steps, you can easily locate this part of your machine.

Locations Of The Release Valve

A release valve of a floor jack is one of the most critical parts of the machine that is involved in every maintenance job. So, if you own a floor jack, then you need to familiarize yourself with this part; otherwise, even a task as menial as pouring hydraulic jack oil will be difficult for you. The release valve comes in the shape of a small nut. Finding it seems daunting, but the reality is the opposite. It is commonly present in the two locations in a floor jack. Those two spots are shared below.

Behind The Handle Of The Floor Jack

Under The Handle Of The Floor Jack

Importance Of The Release Valve

Many users may not even bother to search for the location of the release valve on their floor jacks, and that will be a major mistake. This small part is responsible for a very major task. So, it is best for you to familiarize yourself with its position. The release valve of a floor jack plays a major role in lowering the raised pad of the machine. As its name indicates, it releases the pressure, which then helps in the retraction of the ram. Once the ram is retracted, the load that the floor jack is carrying in the air can be lowered to the ground. If the release valve stops working, none of the actions stated above will happen; hence your floor jack will turn into a useless piece of junk.

A floor jack comes with a gazillion small nuts, and many other parts protruding from the machine in every direction. Therefore, it may seem daunting to identify every part and nut from each other. Do not worry, with the help and guidance of this article, you will never mistake the release valve of your floor jack for any other nr common nut.