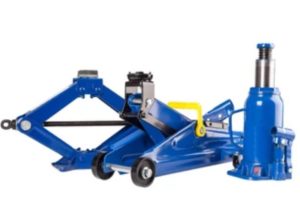 Considering a perfect world, It might be true that your vehicle would always be ready to give you a lift.

However, there are occasions, when the opposite is true. Sometimes your car needs a little support and maintenance.

Even if you have ultimately failed to solve the problem yourself, it’s good to get underneath and see what’s wrong with your own eyes.

The moment a mechanic puts your car on a hoist the charges begin accumulating.

In the market, there are several different kinds of car jacks to choose from. The real question is which one is right for you and your vehicle?  In this article, we have examined scissors and bottle jacks in order to provide you with a detailed and structure overview of these two types of jacks.

As you might have seen both types of these jacks around, and you want to know exactly are the differences? Which one is better? Do both of them have their different purposes for use?

Scissor jacks are considered mechanical jacks that operate with the help of a lead screw (read in detail on what is a scissor jack). You just simply tighten the screw to draw the linkages together to raise the jack and then loosen the screw to move the linkages apart in order to lower the jack.

The best thing about scissor jacks is that they have an extremely small footprint which makes them easily portable. Plus, they are small enough to be fitted in a car’s trunk, which is why people mostly prefer to get one to stick in a spare tire well.

Another significant advantage is that they are relatively lightweight. This means that they can easily be transported and could be placed under your vehicle when you are in a pinch, such as while replacing a flat tire with a spare on the side of the road.

A bottle jack is mostly a type of jack that is mounted vertically beneath the load that is to be lifted. This design of the bottle jack enables it to lift more weight and higher elevations. Plus, their design is quite straightforward and simple. If you compare it to other types of jacks, the bottle jack is smaller, which further allows for easy storage.

Bottle jacks are also considered significantly cheaper than other types of jacks. Truck owners find these particular jacks ideal and convenient because clearance is not a major issue with them. Their portability makes bottle jacks quite useful because they can easily be carried to the scene of an emergency.

It’s not that difficult to use a bottle jack. All you need to do is place the jack beneath your vehicle. Now turn the small piston in an anticlockwise direction in order to adjust the piston’s height. After you are doing that, look for the valve at the bottom of the jack. The bottle jacks have a smooth pumping action that enables the user to raise a vehicle higher and slowly.

How do both types of jack work?

Once the crank is turned, the screw turns and raises the jack. The screw in a bottle jack acts like a gear mechanism. It has teeth which are also called screw thread, which helps to turn and move the two arms, producing work. By just turning this screw thread, the scissor jack can easily lift a vehicle that is even several thousand pounds.

Bottle jacks just simply depend on this basic principle that is required to lift heavy loads: they just use pump plungers to move oil through two cylinders. Then, the plunger is first drawn back, which further opens the suction valve ball within and oil is drawn into the pump chamber

Now, as the plunger is pushed forward, the oil goes through an external discharge check valve into the cylinder chamber, and then the suction valve closes, which further results in pressure building within the ram cylinder.

At any place or time, a lot of things can go wrong with a truck or car, and sometimes not all of them happen inaccessible places. So, if it’s not under the hood, then it’s probably under the car.

From simple inspections to oil changes or DIY tires, there is a number of solid reasons to own at least one scissor jack. However, the best reason is simply to stash it in the trunk in case you get in trouble during the journey.

There are possibilities that you may get stuck with a flat tire? or perhaps it could be a mysterious leak? There are countless reasons why your truck or car might need to be lifted off the ground. Bottle jacks are useful tools that are used for supporting or raising trailers or even for propping up sagging structures awaiting foundation repairs.

So here you are, based on the detailed examination of each jack, now you are in a position where you can base your preference on whatever task you want to undertake. If you are interested in a multipurpose jack, the bottle jack is the right option for you.

For those who wish to have a simple portable jack to serve your car maintenance work, then settling for the scissors jack is the appropriate option. Even you can afford it, you can also save yourself the dilemma by getting both of them. After analyzing both jacks in detail, the bottle jack seems to be better than the scissor jack.