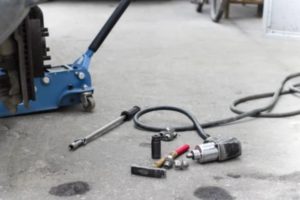 Floor jacks simplify the movement of large or heavy items.

Such jacks are also used to suspend heavy objects in midair in order to provide maintenance access with minimal exertion on the operator’s side.

Although floor jacks can sustain damage from improper maintenance, heavy use, environmental elements, and other factors that compromise their ability to perform.

Regular jack repair and/or maintenance prevents it from the damage caused by these issues by identifying signs of damage at the right time. This enables fast correction of any problems.

This is especially considered crucial for older jacks that have been operational for several years.

Well, Similar to the brake master cylinder in an old car, the seals in a floor jack also wear out over time and its ability to hold loads of pressure falls.

How to repair a floor jack

The best part is that most of them could easily be rebuilt, provided internal parts are not completely damaged and a rebuild kit is also available. This article will enable you to go through the procedure that is required to repair a floor jack.

Signs that indicate the need for floor jack repair

Regardless of the application or type of jack, there are some common issues that are found within this tool category. Problems related to can compromise a jack’s ability to operate efficiently and also negatively impact operator safety. If your equipment indicates these signs, you must realize that it’s to repair your floor jack.

Sometimes the jack is Slow to Release or does Not Fully Extend, this happens because hydraulic floor jacks depend on fluid-driven pressure in order to create movement. Whenever the flow is compromised, it can cause issues with lifting mechanisms.

Another aspect of the jack that you should notice is that whether its Wheels are damaged or squeaky. If you observe any excessive noise issuing from your wheels indicates that it’s now time to replace those parts.

A damaged Frame could also turn into a big issue for your jack, but guess what, It’s among those indications that you might rarely face. if the frame is damaged, without a structural sound frame, your entire unit could possibly fall apart under a heavy load. Now the worst part is that this type of damage typically cannot be repaired and ultimately leads to a purchase of a new hydraulic jack.

Another indication of an issue in your floor jack refers to the foamy or milky oil, which means that water has infiltrated the system. If not repaired quickly, this condition will further cause irreversible internal corrosion. Sometimes, rams fail to respond properly, this usually points to a lack of hydraulic fluid. The fluid leakage is also among the most common problems found in the floor jack, it depends on which fluid is leaking from your unit, this sign could indicate lead to potential problems.

There are few easy steps mentioned below in this article that would help you in understanding the procedure required to repair a floor jack.

If you are going to be working on, or maintaining, your floor jack, make sure that it’s properly clean before starting. If you realize that there is any type of dirt or debris in the hydraulic fluid, it can certainly do a lot of damage to the inside of the cylinders. Just use shop rags to wipe down the cylinders thoroughly before you open any.

When a floor jack is not working properly, most of the time, the plug or dirt in the hydraulic fluid appears to be the actual reason. Have a close look at the rubber plug on top of the cylinder and with the help of a screwdriver to carefully pry it up. If you end with a damaged plug, it would be better to buy a new one to replace it later.

Now just set up a bucket under the hydraulic floor jack and turn it slightly so that the fluid drains out. After some time when the cylinder is empty, look inside carefully to make sure that there isn’t any more debris around that needs to be cleaned up. If you still find some,  just blow it out with some compressed air.

Once you are done cleaning the cylinder, you will need to pour new fluid in with the aid of a funnel. Note that the amount you will use will vary depending on the make and the size of the floor jack. Even if you want to make sure that the cylinder is full. Due to any reason, If you do not have access to hydraulic fluid, you can also use 5W-30 motor oil as a substitute, but you should not forget to replace it later with the correct substance.

Finally just check the rubber plug, new or old, before you properly set it back in place. Just clean it off with a rag in order to make sure there isn’t any dirt left on it. Now, just set it into the hole in the cylinder and press it smoothly. It is important to make sure that the plug should be seated flat without any type of wrinkle in it because it can cause air to leak into the cylinders.

Mostly, the users do not face any other problems once the fluid has been replaced, but just to make sure, you should test the floor jack multiple times before putting any considerable amount of weight on it. Lift the arm several times to check whether it holds the pressure or not.  Then, again check by placing the jack under a vehicle and begin to lift it.