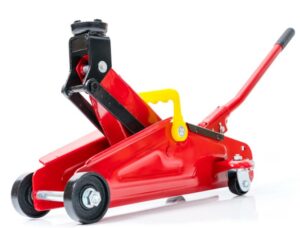 When you purchase a floor jack that comes with the prestigious name of Craftsman, then the malfunctioning of the machine becomes highly disappointing. If the saddle of your Craftsman floor jack is not raising then let me tell you one thing before you start panicking, there is a way to this problem.

The reason why the saddle of floor jacks usually does not rise is due to the presence of trapped air in the hydraulic system. Therefore, the only way to fix this issue is to release that air. This is what we are going to learn today to bring your precious Craftsman floor jack back to its functioning position.

There is no need to spend hours on meaningless videos, or blogs as the entire process of bleeding a Craftsman floor jack has been shared below in simple terms, so even a novice can understand them without any difficulty.

How To Bleed A Craftsman Floor Jack?

This article will give you clear insight into how you can bleed your Craftsman floor jack from the comfort of your home.

Why Is Bleeding a Craftsman Floor Jack Important?

The term bleeding basically refers to releasing all the air that is trapped inside the hydraulic system of your Craftsman floor jack. If there is air inside the system, the floor jack will not function properly. In fact, the saddle may not even move from its resting position. This is why bleeding the machine is important, as it helps in removing all that air from the floor jack.

The entire procedure of bleeding your Craftsman floor jack has been shared in simplified words so you can follow the steps easily.

Push the handle in a downward position, so that you can clearly see the oil filler plug.  If there is a rubber plug, then you need to lift it slightly with your screwdriver. However, if there is a metal nut, then take your screwdriver and unscrew the nut on top of the filler plug. A critical step here is to only unscrew it slightly and not completely. If you unscrew it all the way, it will lead to a messy situation involving oil splattering everywhere.

Once you have opened the oil filler plug slightly, start pumping the handle. You will see that some oil will start coming out of the plug, and in that fluid, you will a couple of air bubbles. This shows that the air that was previously in the hydraulic system of your Craftsman floor jack is getting released.

However, pumping the handle alone will not release all the trapped air. The real bleeding will happen when you pump the saddle all the way up and then turn your release valve to lower the saddle. This step will release all of the air from the hydraulic system of your Craftsman machine. Repeat this step a couple of times till there is no air coming out of the oil filler plug. This means that your Craftsman floor jack has purged all of the trapped air. Tighten the screw on top of the filler plug and voila!

It sounds difficult but bleeding your Craftsman floor jack is not any different than bleeding other models of floor jacks. There are only a few minor differences in the procedure which have been shared in the article above. So, there is no need to call for the aid of customer services. Simply read the article above and get to work.